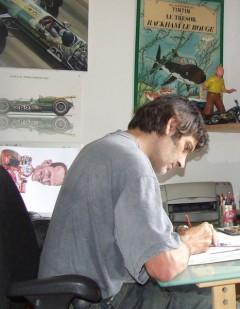 Marc Ostermann discovered his vocation as a young boy when he inherited his passion from his two brothers: motor cars for one and drawing for the other..

He published his first drawing in "L'Auto-Journal" in 1975 and began, in 1976, a long-term collaboration with AutoHebdo, which led him to produce a multitude of diverse and varied drawings, over the following 15 years.

He uses several techniques such as coloured pencils, gouache, oil, and more recently the computer graphics which is becoming more and more popular among many designers. But whichever medium chosen, each drawing starts, as usual, with a traditional sketch which becomes the basis of the work.

In addition to automobile, Marc Ostermann is also passionate about aviation.